The island of Krk is called “the golden island” because its sandy beaches, sunsets, wine, olive oil, and honey are all golden coloured. This largest Adriatic island is connected to land by a bridge. Tourism on the island is focused on charming small towns of Krk, Omišalj, Malinska, Vrbnik and Baška. Visit any of these places on the island and take a walk through their narrow streets. Walking is not the only thing to do here, there is also diving, sailing, bicycling or surfing among others – your hosts will be there to assist you in your wishes. “Vrbnička žlahtina” is an excellent wine which goes well with traditional fishmeals, as well as shells spiced in fine olive oil. 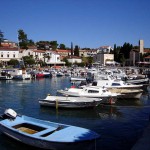 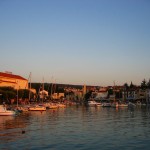 
MALINSKA is located in a wooded bay on the west coast of the island Krk, in the region called Dubašnica (based on DUB, a Croatian word for common oak), made up of 19 settlements. The little churches of Sv. Martin and Sv. Apolinar by the old cemetery were first mentioned as early as 1153, but the history of Malinska starts in the 15th century when a mill by which the place was named was built there. You can set off on a bike ride down the road to village Porat opposite to Malinska, or up to the coast towards Njivice. On both sides of the port are developed and partly paved beaches with diverse attractions related to the sea. If you start on foot from the centre of Malinska, you can reach Njivice walking along the coast. At the end of the hotel complex of Haludovo is the beginning of the Rajska cesta (Paradise road), a wonderful path through the shade ending a few kilometers further, in the bay of Kijac.

Malinska is situated in a wide bay. It is located on the half way between the bridge of Krk and the city of Krk. Once it was known as seaport, now is a famous tourist resort, which keeps its fishing and maritime traditions. Municipality Malinska, except settlement Malinska, encompasses 19 small villages. Some of them are: Porat, Bogovićeva, S. Anton, Oštrobradić, Zgombić …

Gastronomy on the island:

The island of Krk is called the Golden Island primarily due to the colour of wine, honey and olive oil, which are all products of top quality. If you come to Krk, friendly hosts will welcome you with brandy that is served with dry figs. The island’s cuisine is mostly based on fresh fish, scampi and other crabs as well as shells prepared with few spices and obligatory olive oil. There are also many types of homemade pasta (macaroni, gnocchi, “šurlice“) served with sauces. All these delicious meals are recommended with golden colored “Vrbnička žlahtina” white wine made on the island.